It is a very simple task but as always electricity can be risky. Here in this article, I am going to show you all the detailed steps so that you can do the job safely and with ease. Before proceeding to the description, I am going to tell a little about Hampton Bay ceiling fan.

What Is A Hampton Bay Ceiling Fan?

Hampton Bay is a special type of ceiling fan where there is a built-in bulb in the center bottom part of the fan.

So, it serves both as a fan and a light. It is also quite different from the traditional ceiling fan by its looks. It has a more aesthetic look than most other ceiling fans.

Hampton Bay ceiling fan has different models. The common distinction to several types of the fan lies in the type of bulb shade they use. Bulb shade means the covering part of the light bulb.

Fig 01 shows two types of the ceiling fans available in market. The difference between them is the type of covering used for the bulb.

While wiring them you might need a 3-way switch. In that case you must know how to wire a ceiling fan with light using a 3-way switch. Right now, let’s focus on the bulbs and their replacement.

What Kind of Light Bulb Does The Hampton Bay Ceiling Fan Use?

The Hampton Bay ceiling fan uses spiral based bulbs. There are different sizes of those bulbs that are used in the fan. The bulb is placed in the holder and is rotated like a screw to attach it to the holder.

There are different sizes of the bulb available in the market, named- Candelabra, Intermediate and Medium sizes.

The Intermediate and Candelabra are used mostly in the Hampton Bay ceiling fans for their convenient size and luminosity.

How To Replace Light Bulb In Hampton Bay Ceiling Fan?

Well, the main purpose of this article is to make you familiar with the replacement of the bulb in a Hampton Bay ceiling fan. So, I am going to describe the steps in more details for you to understand easily. Hopefully this article will serve as an installation guide for you.

The steps are not hard to do, right? You can try this whenever you need. But always keep your hands dry while working with electricity and take necessary precautions no matter what.

How To Remove the Light Cover or Shade In A Ceiling Fan?

You need to take off the screws and then simply pull out the light cover. It is a very simple task.

Normally there are three to four screws found on the sides of the light cover. You just need to take them off with a screw driver.

Do not forget to hold the cover by your hand while taking off the screws. Otherwise, it may fall and get damaged.

Can I Use Regular Light Bulbs in A Ceiling Fan?

Yes, you can as long as the base size matches. But the performance depends on of your ceiling fan light wattage limit. In that case using a bulb with more watt will not be fed with enough power from the fan circuit.

How Do I Know What Is the Size and Type of The Base of The Light Bulb?

To know the size of the light base you need to look for the reference codes given in the base. The codes are like- E12, E17, E26 etc. The letter ‘E’ indicates the type of the base, while the digits indicate the size.

Knowing the correct type and size of the light is essential when you are going to replace the bulb. These codes are normally written on the holder or base of the device.

Yes, you can use a 60-watt bulb in a 40-watt rated holder in a ceiling fan but the bulb will not be able to give its optimal output due to the scarcity of power. There will be no safety concerns in this case.

But the drawback lies in the illumination of the bulbs. The bulb will not get enough power for its maximum output. Thus, the flux will not be up to the mark.

I think you should be able to replace the bulb of your Hampton Bay anytime you need. This article can be your perfect guide for the job. You will get the bulbs available in your nearest market or electric shop. Choose the right one and follow the steps I have described.

While replacing the bulb, please take the safety measurements. If you are new, no need to hurry. Do things with precaution. Hopefully the topics I covered will also help you to know more about electric lights and related things. See you guys in another article about electrical works. Take care! A ceiling fan is made of a lot of moving parts, and hence it is very susceptible to failure. If you own one of the… One of the most popular additions to improve home beauty right now is ceiling fan light with dimmer features.  So, can you add a light… In the past, ceiling fans could only be operated by switches, but with the rise of technology remote controlled ceiling fans have become more and… 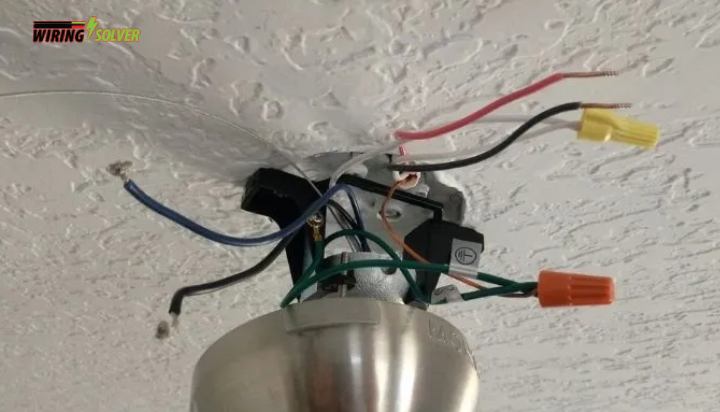 Have you ever noticed how many wires come out of your ceiling fan? Mostly you may see 2 wires coming out to be connected to…